Living in Times of Dragons: The Remnant King Book One” by John A Pretorius.

I will start off by saying I love Dragons they elicit a certain sense of magic that feels otherworldly and also very true.  So, I was excited to get my hands on this book for that reason, what I found blew me away.

I have never read a book like this before. The way the Dragon Lore was presented and manifested into a real-world South Africa was astonishing.  John A. Pretorius did an unbelievable job of building a bridge between fantasy and reality.  And that is how it felt.

It felt as though the dragons were crossing the veil of a dream into the real world.

The Main Character Roger Rommel finds himself caught between a dream and reality as the world around him starts to change in the most frightening ways possible.  Those dreams he thought were dreams of Dragons are in fact real.  And Rommel must learn why the dragons are after him while keeping himself and his son alive as they traverse into a Land of Unicorns and Dragons.

The use of different Dragon breeds and sects of dragons was something I had never seen done before along with the way Dragon Magic and Lore worked.  It was a lesson in Dragons and their history for me as well as an incredible tale of a man caught way past his assumed capabilities that not even God could save him from.

To me, this was also a story of a Father raised without a family trying to be the Father he never had while falling short of his mission to his son and to God.  Roger seemed to find himself through some of the most mind-bending and painful ways.  All the while trying to hold on to who he thought he was and the family he once had.

Learning that he is not as helpless as he once thought but possess a power that is key in the coming war of Man and Dragon.  Roger spends a great deal of time caught directly in the middle of the War not sure who he is fighting for or why a lot of the time.  As his character grows in power so does his sense of purpose.  I do not envy the man’s mission, I felt myself at times feeling for what a terribly horrific situation he was in and the sheer exhaustion he must have felt at the weight of his reality.

The description of the world and the characters were incredible, it all had such a visceral feel to it.  I felt myself running in panic from the Dragons in the Streets of South Africa, while I also felt the darkness, and isolation of the caves, and jungle that Roger Rommel and his son Ian must Traverse to overcome the threat of Dragons that want to end the reign of mankind, and take back the world that they believe is their rightful place.

The characters from human to dragon all brought a distinct voice that was profoundly different and brought to life in an incredible Narrative that you have to see to believe.  The Dragons are still speaking in my dreams actually.  Using their Pyric powers.

In Times of Dragon was not short of Action, gut-wrenching violent moments and mind-bending, heart aching realities.

If you are a fan of Dragon’s, high octane fast paced action, with an intelligently thought out world and characters.  Then this book is for you.

So, grab a bottle of liquid soap and jump into “Living in times of Dragons: The Remnant King Book One.”  You will love this beautifully detailed world of Dragons and Magic by John A. Pretorius I know I did.

Pick up your Copy today by clicking this Link 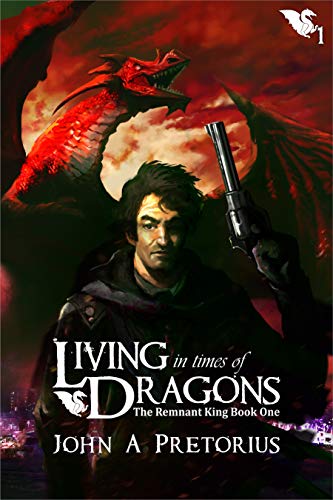 I am a writer, a storyteller, a yarn-spinning freakazoid. My life is full of two things today, lessons and blessings. I write fiction mostly but I also love to write about my life and the things I go through on a daily basis. Writing it out inspires and motivates me and that's why I do it. Plus if it does that for me maybe it will for someone else too. View more posts

One thought on “Book Review: “Living in times of Dragons: The Remnant King Book one” By John A. Pretorius”